With the idea of SpaceCOTS®, the Bavarian start-up ASTRIONICS GmbH is offering a cost-effective alternative by testing and certifying commercially available components for use in satellite construction based on the highest ESA and NASA standards.

To unearth innovative solutions and new business models for the future aerospace industry, the new idea competition INNOspace Masters is to award prizes to creative ideas for optimizations along the entire value chain in satellite manufacturing under the theme “Satellite 4.0.” It is geared towards small and midsize enterprises (SMEs), research institutions, universities, and start-up companies – especially those that have gained Industry 4.0 experience in non-space sectors and want to offer the aerospace industry new perspectives. The competition’s partners, which include the Space Administration of the German Aerospace Center (DLR), Airbus Defence and Space, and Germany’s two ESA Business Incubation Centres, will be sponsoring prizes in three categories for ideas and projects at different stages of maturity and innovation.

One outstanding example of how companies from other fields can get started in the aerospace industry involves commercial off-the-shelf space components, or SpaceCOTS™. Until recently, those seeking to purchase aerospace components—to build a small satellite, for example—have faced a difficult decision: one option requires them to spend a great deal of money and time waiting for corresponding permits, as products in the aerospace realm are generally subject to the strict provisions of the International Traffic in Arms Regulations (ITAR). The other approach is to opt for COTS components; up to this point, however, it has not been possible to qualify these parts for aerospace applications. This new approach makes it easier for companies in other sectors to enter the aerospace industry. This is just one example of the rise of the New Space Economy, which has already brought forth more than 100 new companies. Lured by the promise of significant profits, venture capital funds around the world are providing these aerospace start-ups with fresh financial support.

Having witnessed tremendous growth in recent years, the market for small satellites now offers untold potential—particularly for small and midsize companies. Start-ups such as Skybox, Planet-Labs, and UrtheCast are already grabbing headlines with spectacular satellite fleets, investment deals, and corporate acquisitions. So far, satellite production has been dominated by high-tech operations that manufacture small quantities and sell them at high prices.

“We’re looking for innovations all along the satellite value chain, from the definition, construction, production, and testing phases to launches, operations, and evaluations,” said Dr. Ulrich Kübler, business director at Airbus Defence and Space. 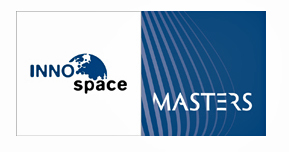